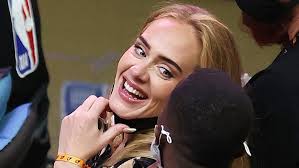 In addition to her songs that are very easy to love, Adele herself has many positive things to be exemplified by our children.

Adele released the new song Easy on Me, which is said to be inspired by the divorce she had to undergo. The song marks Adele’s return after a five-year break from the music industry. Rarely exposure to her personal life on social media, having songs that are successfully sold in the world, it turns out from Adele, a lot of our children can learn from her figure. Anything

Learn from your own mistakes

Once in 2008, Adele canceled her concert. After that, he was very happy, and told Nylon magazine that he wouldn’t do it again. It proves that no matter how old we are, making mistakes is okay. But, it must be accompanied by a sense of responsibility and do better in the future.

While singing a song at the Grammy Awards ceremony yesterday, Adele dared to stop in the middle, because she felt something was not right, then asked permission to repeat it from the beginning of the song intended for legend George Michael. See? Failing in public is nothing to be ashamed of. After all, it can be repeated from the beginning better.

Crying is human. Adele said, “Every now and then let yourself feel sadness to move on.” So, boys, girls, adults, very may cry, because crying is one of the tools for children to express their feelings.

“I really like how I look, I like who I am, and I like everyone that I surround myself with.” This print quote from Adele, frame, and hang near the mirror where our child used to reflect. Enough said.

Not Lingering in Anger With Others

Performance that is not maximal only because of technical errors, and not the singer’s fault as well, does make grammy-class singers angry. Mariah Carey’s shadow isn’t it? Hahaha… But, despite her upset, Adele didn’t want to drag on blaming someone else. This must also be instilled in pre-adolescent children.

Adele wasn’t stingy in praising her fellow singers. She doesn’t want to say Beyoncé deserves album of the year than she does in front of everyone. Sportsmanship accepts defeat. Two attitudes that we, parents, want to have in our children. How nice, right, if children can support each other rather than bully each other?

There is no such thing as being too early to teach our children about kindness. Especially for girls.

Little things like, suddenly paying for food eaten by unknown people in a restaurant, sharing concert tickets, sharing lunch with the person next to her who just happens to not bring the stock all Adele does. So warm and nice, yes. If you remember his speech at the 2017 Grammy Award fitting to receive the trophy in the Album Of The Year category, make teary again, deh.

There are actually many more positive adele attitudes that can be taught to our children. Maybe there are who want to share too?